OK, I’m visiting a friend at a senior park.  I decided to do a deep dive into every activity they have here.  You know:  research what the oldies are up to.  A confession? In my world, I have an entire book of excuses why I can’t walk 2.5 miles in my pristine forest.  Among other things, the lady mountain lion might get me or a she-bear with cubs could attack me.  That’s highly creative with a tinge of truth.  So here I am in Southern California, the land of high energy and high impact dollies with blonde hair and short shorts, and did I forget the exquisite tans?  But I’m in elderville, after all.  These folks are ancient to the millennials.  And so am I.

So I ponied up to the exercise hour.  One day is walking, the next chair yoga.  I smiled.  What a bunch of pansies, I thought.  Of course, I never included myself in the pansies.  After all, who needs all this exercise hype?

And then Rosie walked in.  She is 92 and counting.  As I watched her do all 4 rounds of the walking impact whatever you call it, I suddenly realized that she is my heroine.  She was quoted as saying: “Don’t give up…We’ve worked hard to get here, There is NO GOING BACK.”

So,  Rosie is my new heroine.  If she can hang in there, so can I.  And by the way, there are no pansies in the crowd that shows up.  They are all dedicated to getting as much exercise as they can.  And glory hallelujah, there isn’t an exercise Nazi in the bunch.  They are all supportive of taking it slow, but doing whatever one can to keep moving.

Maybe our senators and political aspirants need to show up at an elder aerobics class. It might freshen their persepective.  Go team!  Go Rosie! 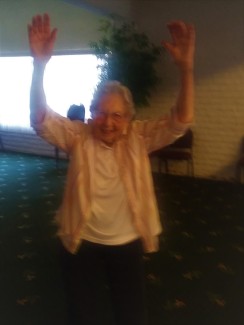 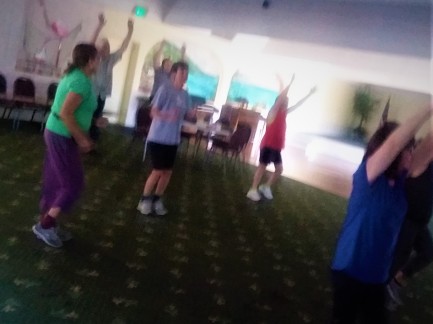 I lost a true friend this weekend.  She wasn’t human but she possessed the incredible attributes that make fine humans and fine dogs.  Maggie was a Golden Retriever who had become blind in adulthood.  In some ways it might have been easier for her as she had memorized so much of life by the time she lost her earthly eyes.

I pet sat her for a number of years and the very essence of that beloved pup seemed to remain with me even after I had driven away.

We had long conversations out at the common area where she particularly loved a variety of sniffs.   It was miraculous with its soft grass, wildflowers and yes, sniffable spaces.  I like to think she saw it all with her “other” eyes. When I walked her, there were the occasional bumps into objects that she quickly learned.  Later she became frightened of the tile floors that made her slide a bit.  Still, she carefully proceeded down the stairs to her pit which she had dug under a shade tree.  A gentle command of “Down” was all she needed to start the descent, and oh how she loved to roll in the grass. Pure Joy!

I loved sitting in the chair in the lounge with her close at hand.  We were buddies and I often read aloud to her.  Most humans don’t reach that far into pet assignments, but Maggie was NEVER an assignment.  I was honored to be with her whenever her owners called.

I like to think that since it is Chinese New Year, and the year of the Earth Dog, Maggie left at an auspicious time.  I also know that she is somewhere above us watching with her new eyes.  Her very gentleness fills the room as I write this last farewell.

The courage she taught me to go on in the face of all aridity will carry me through for many years to come.  Blindness never stopped her one instant.  It was, well, just something that happened along the way.  Wouldn’t it be fine if we humans had that much detachment and yes, courage?

Paws up to you, Maggins.  (This was my pet name for her).  As I sit and watch the falling snow, tears fall for one of the finest dogs I’ve ever had the privilege of caring for.

Pet sitting has become a true journey of the heart, and this fair girl will be missed, incredibly missed by us all. 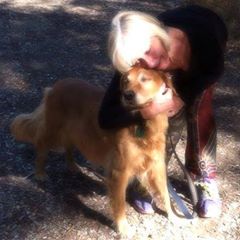 This week I spent precious time with a glorious feline companion named Sophie.   We encountered two snakes, a teenage rattler and something quite slithery and unknown. My search for information and safety let me down many roads and aside from buying a used mongoose on the web, there are a number of action items to consider, ponder, pray upon and inspire:

So what I would suggest is the following:  Be CAREFUL, Be alert, Dress protectively, stay the heck away from bushes, and BE IN CHARGE.  Pussycat will argue with you, but pussycat will remain alive with your guidance.

OK, let’s talk about instructions for what if?

But let’s get down to brass tacks.  The animal caregiver needs to stay alive to protect the pussycat.

But one thing she said:  a 911 team does NOT carry snake bite kit or antivenom kit.  You are going to love this one:  Her advice was to tell 911 the exact road to take to the place (ER) and say you will them in your car, license plate given and flashing lights as you  meet them half way. Now I have to tell you, this is a cool idea, but how many of us are going to be calm enough to do that one.

Another friend suggested a snake bite kit.  Allegedly it removes the venom on several occasions. Some articles bash this kit saying that it only removes 2  to 3%  of  the  venom, and not in muscular areas.  I, for one, am not going to take any chances and go with the statistics and not buy one at Big 5 or another store that sells them.  They are not expensive, and COULD SAVE YOUR, repeat, YOUR life. This option is still up for grabs. I think I’d have one around “in case”, but use it only if physician advised. I returned one I purchased as it was too intricate. There are really simple ones available on line. Another person from Marin told me that you can buy antivenin (or antivenom)but I’d research this a whole lot further with a reliable vet and a physician. Yet another snake advisor recommended snake immunization. This needs far more research.

So there you have it,  Short of renting a mongoose on Ebay, it takes a lot of awareness and caution.

p.s. Just got an email, and a tweet, from a Mother Snake. She has reminded me that           snakes do a lot of good stuff. She recommended having a picture atlas of harmless snakes like King and Garter who keep the rodent population at bey. folks that have lived in the desert areas take snakes for granted. They are part of the topography and simply need to be respected. A  lot of folks say that snakes are shy and will move away, but let’s face it, we need to be prepared when in snake country.  I suspect I shall be getting a tweet from a Mother Rat soon enough. Frankly, I am sending out a call for all of us critters, large and small to be AWARE and use common sense and also to be prepared for any emergency.  Amen.  Kumbaya, and kazoo at rest.

For the first time in my writing life, I find I am speechless and in awe.  I struggle to form the words for how I truly feel.  I mean no humor or diminution in calling our beloved Cecil, a Pussy Cat.   He was a magnificent and royal lion.  He was also a poster being for all that I find painful in a world of audacity and arrogance.  In a heartbeat, a wild and wonderful creature can be erased from life as we know it by someone who needs a trophy on his wall   Do I forgive this entitled fool?  Heck, its the Christian thing to do, is it not?  Frankly, I must put this item, this elusive forgiveness, aside until later.  Right now, I’m in grief and find a huge lump in my heart for a creature who will no longer be reigning over his pride. As for laws and protection,  Cecil was SAFE.  It took law breaking, insane arrogance and money to lure this wonderful creature out of his place of sanctuary. .    Maybe silence is all I can muster or, perhaps, a silent roar.  I’ll look up and do so, but for now I can only bow my head and weep.